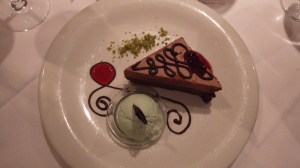 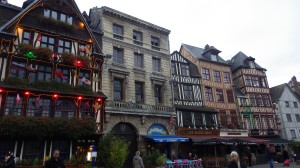 Tomb of Richard the Lionhearted 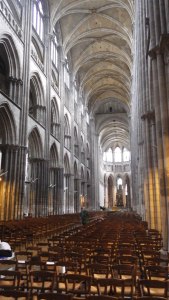 It seems that in every sizable French village and city, the Catholic Church has built a monumental cathedral honoring her first lady. Originally constructed in 1125, Cathedrale Notre Dame de Rouen features breathtaking interior beauty as well as intriguing history. We learned that during the World War II bombardment of Rouen, several allied bombs fell astray and significantly damaged the cathedral. On one side, a bomb took out six of the eight flying buttresses designed to support the main structure, but left the shrine to Saint Catherine intact. The fact that the entire cathedral did not buckle and fall is referred to as the “Miracle of Saint Catherine”. We also viewed the tombs of Rollo the Viking Warrior (Robert I) and Richard the Lionhearted, the first and last Dukes of Normandy. 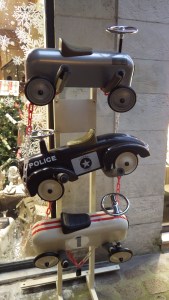 On a more secular note, the cobblestone streets of the city were bustling with early Christmas shoppers and lined with a mixture of local artisan and high-end Parisian brand shops decked out for the holiday season. On the square of Joan of Arc is La Couronne, the Michelin 3 star restaurant where Julia Child got her inspiration to produce her famous cooking show. We also viewed the monument commemorating Claude Monet’s visit to Rouen when he included Notre Dame in his series of cathedral paintings, as well as the former brothel from which he painted it! 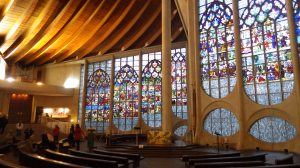 Church of Joan of Arc

At the cathedral is the court in which Joan of Arc was tried and sentenced to death by burning. This brave young woman, “called by God” to lead the French in battle to resist the English, entered the king’s army disguised as a boy at the age of 16, led the French in numerous victories, was captured by the English, burnt at the stake in Rouen in 1431 at 19, and eventually canonized a saint of the Catholic Church in 1920. We visited the site of her execution and the unique church built there in her honor.

The French love their beer too!

Upon return to the ship we were greeted by Capt. Franck with a champagne toast at the traditional Captain’s Dinner, which featured five courses with accompanying California wine pairings from Trinchero Family Estates, including a Napa Cellars Sauvignon Blanc and Cabernet Sauvignon, a Folie a Deux Chardonnay and Pinot Noir, and a very nice dessert compliment, Terra d’Oro Zinfandel Port. The meal was delectable, featuring French truffle-goose liver pate, cream of fennel soup with poached Atlantic sea bass and Pernod, and “Medaillon d’Agneau Mont Saint Michel” (a wonderful lamb dish).