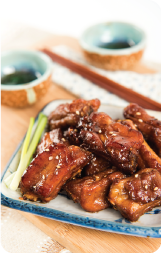 DIRECTIONS:
Preheat the oven to 300 degrees. Rub the ribs all over with the five-spice powder, then season generously with salt and pepper. Put the ribs in a single layer in a roasting pan and slow roast until they are almost tender, about 2 hours.

Meanwhile make the glaze. In a large bowl combine the soy sauce, grapefruit juice, hoisin sauce, ketchup, vinegar, brown sugar, chili, garlic and ginger in a saucepan. Bring the sauce to a simmer over medium heat. Cook until the sauce reduces and thickens then remove from the heat. Strain the sauce and reserve.

When the ribs are about 30 minutes away from being done, baste them with the teriyaki sauce. Cook until the meat pulls easily from the bone.

Just before serving, preheat the broiler. Baste the ribs again and brown them under the broiler for 5 to 8 minutes (or to desired level of crispness, keep an eye on them, they can burn quick). Separate the ribs with a cleaver or sharp knife, pile them on a platter and pour over remaining sauce. Sprinkle with sesame seeds, cilantro and green onion as desired.  Recipe courtesy of Tyler Florence.

Cambridge California Cellars strive to produce wines that embody the designations from where they are grown.  Their “Limited” wines represent those rare, exceptional lots from distinguished appellations throughout California’s wine country.  The Syrah Grenache is sourced from Dry Creek Valley, specifically the Simpson Vineyard that sits on the northern end with a cooler climate.  Situated between the Russian River and Lake Sonoma, the vines are well-irrigated and produce ripe, plump styles of wine.  Most known for growing exceptional Zinfandel, Dry Creek has expanded its reputation over the years and is now growing excellent Rhone and Bordeaux varietals.

“Syrah and Grenache, these two grapes play well together. Grenache for its raspberry, white pepper and mint notes and Syrah for its more brooding black pepper along with darker fruits like cherry and plum. This is just tannic enough to ask for food to accompany it.” – Doug Frost, MS, MW