‘Pour Me A Slice’ is sweet and creamy. Beehive Cheese partnered with their good friends at Basil Hayden’s to create a cheese infused with their Kentucky Straight Bourbon Whiskey. As you near the rind, the spiciness of the bourbon becomes more pronounced. This beauty will be enjoyed by bourbon and cheese enthusiasts alike.

“We love pioneers and explorers. That’s what makes our partnership with Basil Hayden’s so exciting. Basil Hayden Sr. began distilling his Kentucky Straight Bourbon Whiskey in 1796 using his own mash based on what he had on hand. Unconstrained by the rules of traditional bourbon, he discovered what we now call “high-rye”. At Beehive Cheese, we can relate to breaking rules and going our own direction. Since our founding, we have produced unique and complex cheeses that are leaders in their category of American cheeses.” – Beehive Cheese Company LLC

WINE & CRAFT BEER PAIRING: Drink along with any of Basil Hayden’s premium bourbons, medium to full-bodied red wines, ales of all kinds and ciders. 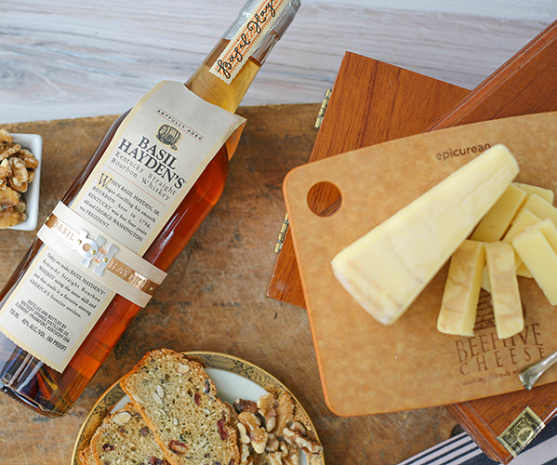 This Utah Cheddar is rubbed with espresso and lavender, and is a winner of 20 major awards. Barely Buzzed is the perfect party cheese. It’s easy to pair, stunning to look at, and always the center of attention on the cheese board. The espresso and lavender rub imparts notes of butterscotch and caramel, which are prevalent near the rind, but find their way to the center of the cheese. This is a full-bodied cheese with a nutty flavor and smooth texture. Hours after it’s made, the special grind is rubbed on the rind. The 20-pound wheel ages for 6-8 months. As it ages, Beehive’s cheesemakers test each batch to determine the right time to introduce the wheel into the world. Learn more about the story behind Barely Buzzed here.

ABOUT BEEHIVE CHEESE COMPANY:
In 2005, Tim Welsh and his brother-in-law, Pat Ford, had a vision of opening a creamery in the mountains of Northern Utah. With no more than eight days of cheesemaking experience between the two of them when they first began, the two broke tradition without even realizing it. They enjoyed the freedom to experiment and created their own rules about what artisan cheese could be. With their families by their sides, they built a company grounded in independent thinking, connectedness, and authenticity. They partnered with some of the best cheese researchers and creameries the western U.S. had to offer. Today, Beehive Cheese continues to produce award-winning cheeses that bring family and friends together. Learn more about Beehive Cheese Company’s story here.

ABOUT THE FOUNDERS:
Pat Ford: 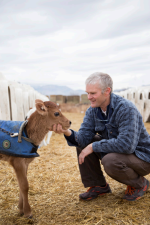 Pat Ford has grown Beehive Cheese into an industry leading maker through his relentless positivity and enthusiasm for customer service. His career in sales has spanned over several decades to include real estate development, business to business software sales, and a brief stint in fire truck sales. Service is very important to Pat. He’s been an active member of the American Cheese Society (ACS) for the last 15 years and served on the Board of Directors for six years. During his tenure on the ACS board, he played an important role in Pat Ford 19 the creation of the Certified Cheese Professional (CCP) program. When he isn’t busy traveling the world with his wife, Jeanette, you can usually find him driving a tractor (or mule) on his ranch. He’s a proud father of five and a grandpa to nine spunky, cheese loving grandkids.

Before starting Beehive Cheese he worked in the fast-paced world of software and technology. He founded Beehive Cheese with his brother-in-law, Pat Ford. Tim poured every ounce of passion into making exceptional, award-winning cheese. Supporting local arts is very important to Tim. Tim has served on the Advisory Board at Red Butte Garden / University of Utah in Salt Lake City. He also serves on the Board of the California Artisan Cheese Guild. His charitable interests include the Ogden Friends of Acoustic Music Festival and their year-round events. Tim has traveled the world with his wife, Kari, and three sons—all of whom work at Beehive. He enjoys cooking, taking in a concert at Red Butte Garden, and snuggles with his two pups, Noodle and Gypsy

WineStyles of West Des Moines is excited to announce they have got their hands on a small amount of Hook’s Cheese Company’s special 15 Year Cheddar! While this is not featured in this month’s Cheese Club, we promise you don’t want to miss this. Ask how you can pick up this very special, limited cheese at your local wine store!

Join our Cheese Club and bring home a match made in heaven!

If you enjoy pairing cheese with wine, this is your club!  Each month you’ll discover specialty and artisan cheeses to pair with your Wine Club. Monthly cheese selections are chosen by your local WineStyles participating location. It’s the perfect opportunity to Taste, Learn and Enjoy® amazing artisan cheese every month! Only $19.99/month and your wine won’t be lonely!  Click to learn more >

✅🍷Mark your calendar for February 22 wine tasting with Cynthia Lohr, Co-Owner of J. Lohr Vineyards. She will be joining us on the big screen nationwide at participating WineStyles stores. Call ahead and save your seat, bring a friend!