Dead Arm is a vine disease caused by the fungus ‘Eutypa Lata’ that randomly affects vineyards all over the world. Often affected vines are severely pruned or replanted. One half, or an ‘arm’ of the vine slowly becomes reduced to dead wood. That side may be lifeless and brittle, but the grapes on the other side, while low yielding, display amazing intensity.

This is one of the more pure fruited versions of this iconic wine that we have seen in recent times. Highly aromatic in the early stages of its life, the nose is dominated by an array of perfectly ripe berry fruits and spicy notes. The dark, earthy and savory characters that we are well accustomed to, whilst present, seem to be taking a back seat. Nonetheless, they play an integral role in adding depth and complexity here. The palate is similarly positioned, showing almost restrained fruit weight but great depth of flavor and wonderful brightness. What hasn’t changed is that line of fine, lively tannins that present themselves early and drive the wine from start to finish, drawing fruit flavor along with them.

VINTAGE:
A wet winter ensured good sub soil moisture and set up the vines well with healthy canopies. Spring was very dry with above average temperatures, a heavy downpour in January was a welcome relief. Mild conditions during the ripening period produced wines that show an abundance of spicy fruits with great color, richness and balanced tannins. Vintage started on 30 January, the earliest start on record by one day.

Small batches of grapes are gently crushed and then transferred to five tonne headed down open fermenters. These batches remain separate until final blending. Foot treading is undertaken two thirds of the way through fermentation. The wine is then basket pressed and transferred to a mixture of new and used French and old American oak barriques to complete fermentation. The barrel ferments are aged on lees, there is no racking until final blending and no fining or filtration.

CELLARING POTENTIAL:
The youthful exuberance and purity offers itself up for relatively early consumption (in Dead Arm terms that is). However, the lovely balance between acid and tannin along with the depth of fruit promises greater things to come. Watch patiently as the earthy vineyard expression grows with time. This wine will reach its full potential with bottle age up to at least 20 years. The considerable structure and depth will ensure that the fruit characters will develop over time revealing more complexity. This wine is best stored in an environment free of direct sunlight and with consistent temperatures between 10°C and 15°C. 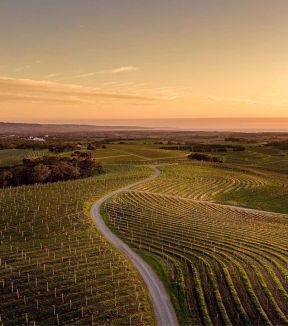 Shipsters’ Rapture is named in honor of Henry Shipster and his family who owned the vineyard before the Osborn family. The Shipsters are said to have delighted in their small plot of land, lovingly planting it to vines, an orchard and Needle Pines that still line the vineyard today.

Upon release, The Shipsters’ Rapture has a vivid, young, dense, purple-red colour. The nose is dominated by deep, dark purple fruits. Initially a little tight, with air there is the appearance of spice and flowery, mulberry notes.

Deep, rich mulberries and plums are the feature fruits on the palate. There is also a very appealing volume of spice on the finish. The cooling influence of the steep vineyard has created a more focused, linear wine. There is a real density to the wine with lovely long, mineral tannins that really linger. This wine epitomizes elegance but power. It will benefit from cellaring and decanting prior to serving is recommended.

VINTAGE:
Above average autumn rains set the vines up well. There was some heat during flowering which reduced crop levels in but with no ill-effects on quality. There was some more warm weather in January as the reds were going through veraison, this did no damage, but did encourage an early start to vintage. The day time temperatures were mild through out ripening with mild to cool nights. 2010 was a very strong vintage in McLaren Vale with the reds in particular showing excellent varietal characters and balance.

THE VINEYARD:
This very steep south aspect vineyard (depicted front) was planted to Shiraz in 1969. This aspect promotes the flowery fruit characters of the wine. The floweriness is further enhanced as the vines are situated in a steep gully where considerable cold air drainage occurs at nightfall. The geology is Blanche Point formation (limestone based), promoting the powerful structure of the wine.

THE WINEMAKING:
Walking the vineyard rows and tasting grapes, Chester Osborn classifies and determines the ideal picking time for each individual vineyard. Small batches are crushed in the Demoisy open-mouthed, rubber toothed crusher and then transferred to five-tonne headed-down open fermenters. These batches remain separate until final blending. Foot treading is undertaken two thirds of the way through fermentation. When tannin extraction is just right the wine is basket pressed and transferred to a mixture of new and used French and old American oak barriques to complete primary and secondary fermentation. The barrel ferments are aged on lees to keep the wine fresh while also reducing the oak influence. There is no racking until final blending. Chester and the winemaking team undertake an extensive barrel tasting process for the ‘Amazing Sites’ range and only the best shiraz blocks from each vintage are selected.

CELLARING POTENTIAL:
The youthful exuberance and purity offers itself up for relatively early consumption (in Dead Arm terms that is). However, the lovely balance between acid and tannin along with the depth of fruit promises greater things to come. Watch patiently as the earthy vineyard expression grows with time. This wine will reach its full potential with bottle age up to at least 20 years. The considerable structure and depth will ensure that the fruit characters will develop over time revealing more complexity. This wine is best stored in an environment free of direct sunlight and with consistent temperatures between 10°C and 15°C.

ABOUT D’ARENBERG:
Since 1912 the Osborn family have tended vineyards in McLaren Vale, South Australia. It is one of the undisputed kings of Australian Shiraz and other Rhone varieties that have historically defined the region. A century on, their vineyards have grown to some 450 acres in McLaren Vale, including Shiraz dating back to d’Arenberg’s first plantings in 1912, and nearly one-third of McLaren Vale’s old bush-vine Grenache. Today fourth generation family member, Chester, makes distinctive wines using traditional methods both in the vineyard and the winery. Recently, Chester has converted all of the family’s vineyards to organics and biodynamics and moved to solar energy in the winery. All the while, in terms of winemaking, not much has changed – all the wines are basket-pressed, the reds foot-trodden during fermentation; everything is done in small batches, leading to an impressive array of bottling every year, each showing a different facet of McLaren Vale terroir. Having been inducted into Wine & Spirits Magazine’s Hall of Fame for earning place on its Top 100 Wineries nine times, this accolade is a reflection of d’Arenberg’s revered reputation worldwide. To learn about the history of d’Arenberg, click here.

The 2014 Steyning is an excellent example of a Coonawarra Cabernet Sauvignon. It has a concentrated aroma of leather, olive, dark blueberries and plum. The densely concentrated fruit is supported by cedar French oak, and is a wine of complexity and length bolstered by brooding savory tannin. Drink fantastically now, or well into the future. Suggested to decant before drinking.

© Photo by Penley Estate of Hans

Viticulture:
Hans is a natural in the Vineyard. He’s a Viticulturist and a Geologist who has always been keen to understand the interaction between the vine and its own local geology. A visit to Portugal’s Douro Valley helped him realize his two fields of knowledge were a perfect match and since then Hans has been busy applying his geological mapping skills to the mapping of vineyards around Penley Estates. Hans’ aim is to always identify the small parcels of fruit in each vintage that will enable their winemakers, Kate and Lauren, to bring the ‘season to your glass’.

Winemaking:
Kate is one of Australia’s best contemporary winemakers. Wineries such as Wirra Wirra (McLaren Vale), Tim Kanppstein (Clare Valley), Seppelt (Great Western), Punt Road (Yarra Valley) have all benefited from Kate’s brilliance. There is no denial of talent and absolute harmony when it comes to Kate and the winery, which the Penley Estate has witnessed each year since she started in 2016.​ Her investment in Penley is what has fed their evolution into creating some spectacular contemporary varietals. Coupled with the addition of winemaker, Lauren Hansen, it’s as though Penley Estates have taken an almighty breath of fresh Coonawarra air. Learn more about their team here. 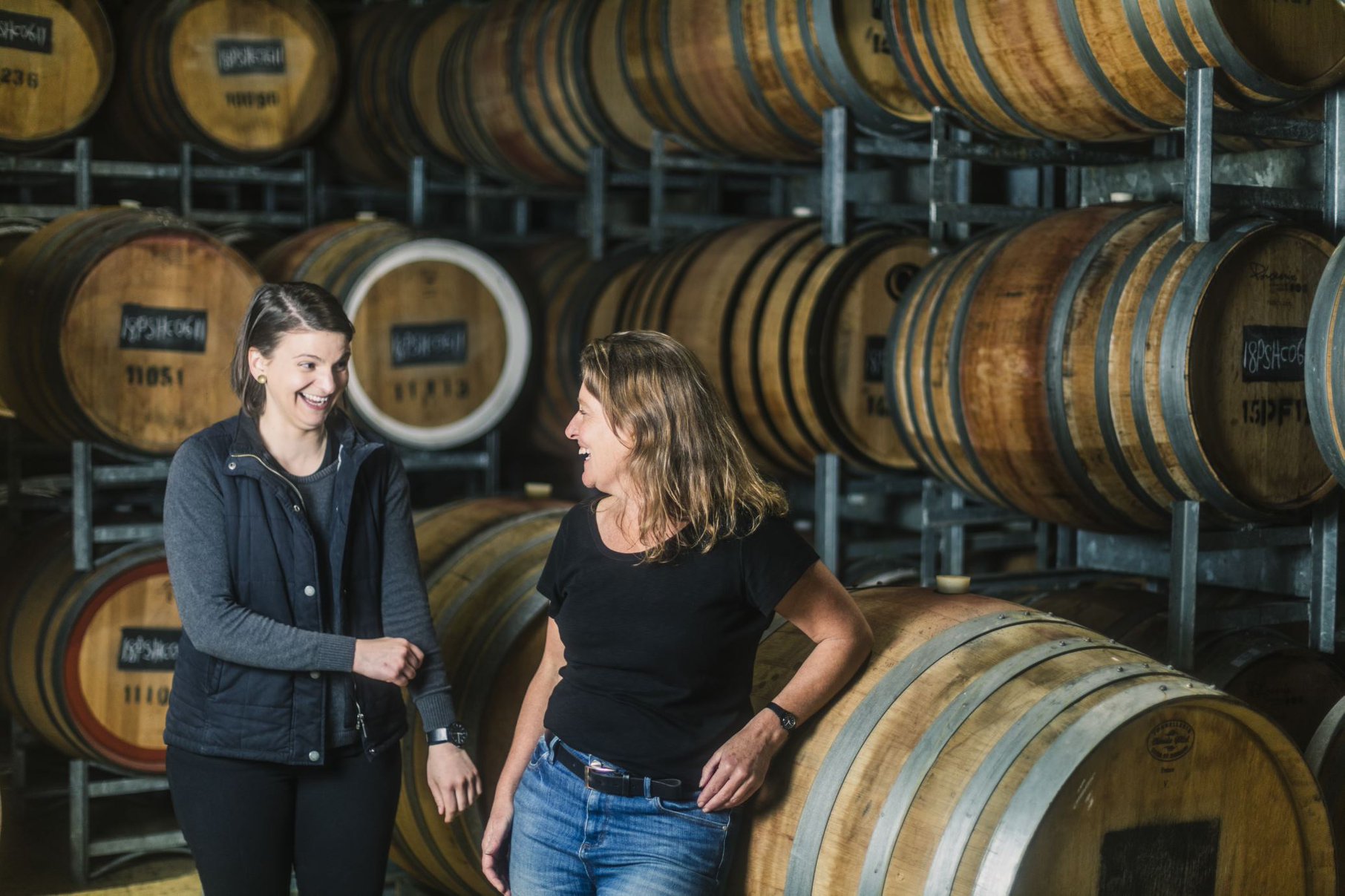 About Penley:
The Penley Estate wine-making history dates back to 1844, but it really began with a red sports car in 1945. It was a collision of hearts and minds, a collision that had been 100 years in the making – refined and distilled from two pioneering winemaking families When Reginald Lester Tolley rolled up to a function in his red sports car, Judith Anne Penfold Hyland was suitably impressed by the car and rather taken by the man behind the wheel. Sparks flew, romance blossomed and Penley was conceived (as a business name) in 1947 after Reginald and Judith married. However, it wasn’t until 1988 that the Penley name came to life, when the children of Reginald and Judith decided to create their own wines and put a label on tradition. They bought a plot of land in Coonawarra, planted cabernet grapes and called it Penley Estate. In 1995, they built a winery at Penley Estate – a full on, all the bells and whistles, impress me with your red sports car winery. Their reputation had grown by then, and it made sense to have everything on site. They planted more vineyards, added some Shiraz to the Cabernet, and increased their range of wine, producing classic Coonawarra reds that were full-bodied, to be kept and savored. To learn more about the history of Penley Estate, click here. 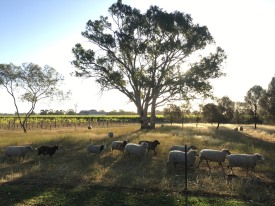 “Our history is a rich mix of endeavor, passion and vision with a touch of scandal and madness thrown in for good measure. We could write a book about it. Instead, we’ll leave you with the words of our glamorous mother; words that we hope you’ll taste in every bottle of our contemporary Coonawarra wine… ‘Grow up and be fascinating.'” – Ang and Bec Tolley