ABOUT THE VINEYARD:
The vineyard slopes to the southeast and is comprised of well-draining glacial loam. Soft morning sun promotes slower grape maturation and longer “hang times” in this secluded micro-climate. Rarely do vineyard conditions afford a winemaker the opportunity to make a wine such as this.

VINTAGE NOTES:
“We were challenged this year by a warm winter, a cool spring, and three summer heat waves, but the gorgeous fruit at harvest released our worries. Yields were down we were blessed with great quality and consistency. Small clusters with some of the smallest berries we’ve ever seen. Very concentrated but marvelously flavorful!” – Nick Goldschmidt and the Goldschmidt winery 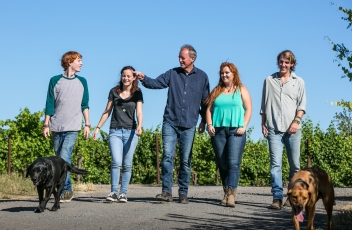 The magnum bottle is signed by winemaker, Nick Goldschmidt. Forefathers Lone Tree Cabernet Sauvignon comes from a 3 acre parcel just north of Geyersville. Deep ruby-black in color.  It highlights blackberry, cassis, and plum aromas with nuances of malted chocolate and tobacco. On the palate, there are savory tastes of black cherry and black currant with smooth, finely-structured tannins. This wine is beautifully weighted and will continue to develop complexity well into 2025.

ABOUT THE VINEYARD:
This mountain vineyard faces east avoiding hot afternoon temperatures. East-facing slopes are a relatively rare occurrence in the Alexander Valley, as most are either heavily forested or too steep to plant. Up 800 feet in elevation, this vineyard runs cooler than others along the valley floor, allowing grapes to ripen very slowly at first. Starting in September the morning fogs roll in and cover the valley completely. Lone Tree is above the fogline and gets abundant sunshine for the remainder of the season. The overall season is longer than the others though and the longer hang-times translate into more complexity and depth. Learn more about the vineyard and its production here.

VINTAGE NOTES:
“Bud-break occurred three weeks ahead of normal but March and April remained warm with no signs of frost. In May, however, the weather changed considerably. Unusually cool and somewhat damp days lingered for the first two weeks during fertilization of the vines’ flowers. This caused a lot of shatter in the developing clusters, which led to fewer flowers and ultimately less berries. Warm weather returned through the rest of the season with a heat spike in early September. A tiny crop ensued and with it tiny berries. Some of the berries were the smallest we’d ever seen! Definitely a vintage for the record books in terms of yield but equally noteworthy for its depth of flavor and extraordinary concentration.” – Nick Goldschmidt and the Goldschmidt winery

ABOUT THE WINEMAKER:
Nick Goldschmidt was born and educated in New Zealand and trained in Australia.  In 1989, after spending 18 months of winemaking in Australia, New Zealand, California and South America, Nick returned to California with an amazing range of winemaking experience.  In 1990, Nick and his wife Yolyn settled down in Healdsburg, California becoming Simi’s Chief Winemaker and then Vice President in 1996.  In 1998 Nick and Yolyn established their own line of wines with the release of Goldschmidt Vineyards and Forefathers, with the goal of focusing on site specific vineyards from around the world. Having produced so many world-class wines around the globe, Nick knew exactly the vineyard sites he would choose for his wines.  The wines are all single vineyards, 100% varietal, handcraft, small production artisan wines. Learn more about Goldschmidt Winery here.

🍷🍇🐻 It's our year-end Educational Wine Tasting Class, collect your last berry! Join us for a Spanish Wine Tasting, call your local WineStyles!